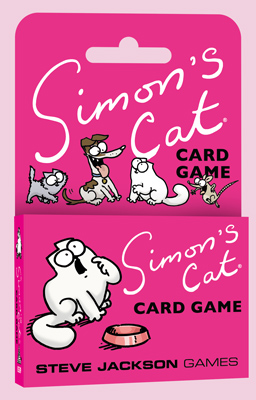 Impulse-priced Simon's Cat is a lighthearted (and downright silly) romp for 3 to 6 players. Some lucky retailers were treated to a sneak preview at the recent Steve Jackson Games Open House, prompting much laughter amid requests to pre-order!

Go around the table playing cards to escape Simon's attention. Get caught and you get Blame. Get too much Blame and you get fed last. No one wants that.

When asked about Simon's Cat Card Game, co-designers Randy Scheunemann and Sam Mitschke pointed at one another and said, "It's his fault."

Simon's Cat is an animated series featuring the mischievous and often hilarious antics of a fat white cat and his long-suffering owner – Simon.

Independent, mischievous, cute, brilliantly observed and above all, funny, Simon's Cat is a character that millions around the world have taken to their hearts.

These independently produced online cartoons and physical books reach out to a massive, pre-established global audience. They maintain a fun and friendly dialogue with their fans, who provide them with constant, invaluable feedback that results in high-level audience engagement.

Steve Jackson Games, based in Austin, Texas, has been publishing games, game books, and magazines since 1980. Its best-selling game is Munchkin, with almost 7 million copies of the games and supplements in print worldwide. Other top sellers are GURPS (the Generic Universal RolePlaying System), Zombie Dice, and Illuminati. Past hits have included Car Wars and Toon. Steve's very first game, Ogre, originally released in 1977, drew almost a million dollars' worth of Kickstarter support in 2012 for a super-deluxe edition, which was released in late 2013.